It's difficult to blog when things are going well, because everyone knows blogging is all about angst (mine, anyway.) It's also hard to say when things are so far into the gutter that you can't quite comprehend dishing that out in such a public forum.
Even if I could - I can't say it while there's still a chance it might work out, or I can't say it because it's not my problem, specifically, no matter how much it breaks my heart.
Life's just not far, bad things happen to good people (or mediocre people, but still!) I want to talk about it and I want a shoulder to cry on. But I have to stand up and be tough and all that other nonsense. Still, if you can, if you do...say a little prayer for me and mine. 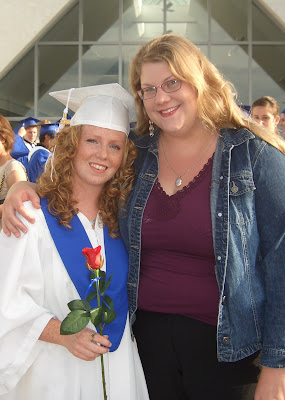 So my baby sister graduated this weekend, and is in fact at her Dry Grad party as we speak! Of course, it's been a bit of a crazy weekend, since we've shown the house three times as well! So, without having too much time to reflect, I've still managed to have a couple brief thoughts on my sister.
Em's my champion, fighting anyone on my behalf - even me. She's beautiful, inside and out, funny, loving, smart...so incredibly smart. She's also my littlest sister - the one I most remember as a baby, remember saying "Fiffer" since she couldn't pronounce "sister" and "Hadou" for my name. It's hard to believe she's graduated already, and about to head off to University to start pre-med (on scholarship, of course.) She wants to be a pediatrician, and though I tease her that at 5'1" she'll really be able to relate to her patients "on their level" I really do think she'll do a tremendous job.
I love you, Emmy dude. And I am so incredibly proud. You're my favourite youngest sister. (What, did you think I was trying to get myself in trouble here? :P)

Sorry it's been so long since I've updated - all two of you who care ;-) I've just been too busy with real life to blog! As previously mentioned, I've been doing a summer class - with it only being six weeks long, I just had my second midterm - yikes! It's been good, though, and quite interesting. I've also had to pay a bit of extra attention for a classmate who has missed the last week - seems her baby decided to come early! I went to take her some notes in the hospital, but unfortunately the little (very little - preemie) one had to be in the NICU so I didn't get to meet her.
Oh, and speaking of babies - I spend most of my mornings with a twenty month old, now. His name's Sam, and he's pretty darn cute. My new job - working as a nanny. At about noon either one or both of his big brothers come home (depending what kindergarten day it is) and I hang out with them for a few hours. Yesterday I managed to do quite an impressive drawing of a pirate ship - and I think this helped to get me just a teensy bit closer to the five-year-old's good side. I do like how children are so easily impressed - my crayon skills certainly wouldn't gain me entrée into Emily Carr.
That's about all there is in terms of news though. I survived my sister's wedding - physically and emotionally intact ;-) It was fun, and great to see some family I hadn't seen in a while, like my aunt, uncle and cousin. (Also, it was good to have my big ex-hockey playing cousin Rob there to help me move the piano after the ceremony!)
Oh, and one more thing. Tonight, I fell in love. Ya see, he's tall, dark and handsome - just my type, eh? I swear he's one of the most gorgeous things I've ever seen, he's 17h and a bay. Oh, if you haven't figured it out yet? He's a horse. :P I was out at my friend Teri's for a year-end choir BBQ, and met Skylar for the first time. I wish I'd thought to take my camera - both for the gorgeous 8 horses that shes has and for the beautiful property. She seemed quite enthusiastic about having me come out to ride, though, so I'm hoping we can work that out in the near future!
In the meantime, though, tomorrow's a particularly early morning for work - 5:30am. So it's actually past bedtime already, really. (My, such a turn from the 2am nights of not too long ago!)
So, wish me sweet sleep, and I'll try to keep you posted just a little better in the next little while!