Okay, so apparently I like to shake things up a little by hardly posting for several months, and then three in two days. Works for me :-P
If you'll kindly direct your attention to the right of your browser window you shall see a new! improved! feature! offered by the lovely folks over at Google Reader. It links to some of my latest favourite blog entries from friends and such. They're all lovely people, so feel free to click on through and say hi!

Well, looks like that so-called job just set my BS meter to flying off the charts. I mean, I'm sure they're a lovely company and all, but I don't want to join your pyramid scheme, thanks, I just want a job. Blah. I'm ridiculously tired and cranky and wanting to use words I know I'd regret in the morning. Life goes on, and I'm sure everything will eventually come up roses. Except right now I just want to go to bed and cry.

So apparently my last post was my 100th, and I let that pass without any fanfare whatsoever, and I'm quite sure its feelings are rather hurt. Oops. Instead, let's celebrate entry 101 by talking about that most abhorred of blog topics: dreams. Okay, seriously, I *know* everyone is supposed to hate reading about dreams, but I just have to write this down because it amused me ever so much...so if you hate it, well, come back tomorrow (or, in another month when I finally find the time to post again.)
First off, let me say this: the more I need sleep, the less likely I am to get it. Makes perfect sense, right? Welcome to the wonderful world of insomnia! I was too hot, I was too cold - my freakin' skin was on too tight. I was hungry, I was sick to my stomach (the latter won on that little gem...spent a good piece of the night, how do they say? Oh yes, bowing to the porcelain god.) Now, you see, talking about dreams doesn't seem so bad...
With all the hype on NBC it's not terribly surprising that I dreamed about the Heroes premiere, in my own little way. Hiro Nakamura has got to be one of my favourite people evah :-D In my dream, he and Peter Petrelli were in prison, but escaped by becoming one with the walls. (I don't know.) My mind graciously played me both a live-action and anime version of this! Then, focus shifted to the others left in the prison. They were mentally cloning themselves, or exhibiting multiple personality disorder (though most psychologists put little stock in this, and when it does occur is actually called dissociative disorder...yes, school is creeping back into my dreams.) The Bad Guys (not Sylar, but the ones that Claire's dad was working for?) were monitoring all this for some nefarious purpose, of course, and wanted to know who could replicate objects with their minds and call things or people to them. (Why didn't they just use the accio spell, I wondered? There was also an Iranian man who shared a psychic connection with his father, and summoned him unconsciously whenever he was upset.) The replicated objects were placed in storage, and were stacking so high that there was getting to be space on the edges of this tightly packed warehouse, and objects and animals were escaping to the corners, and about to Escape! the warehouse! For the greater good! In the shifting of the storage pallets, half the people/animals (I think the conjured items manifested the spirits of their creators?) had to die to set the others free, and they were doing it so nobly! And then! Just as a nail was about to pierce one of these noble creatures and open the door, A Bad Person on the other side of the door reached through and (mentally) took control of the nail. She, The Enchantress, stepped through the door and, holding the nail aloft, declare, "This is a key to the city! Who wants it?" And suddenly all that Greater Good fell apart in everyone's bid to telekinetically summon this key - in their personal bid for power.
AAAND then I woke up. Brilliant. It was weird, but interesting, to me, at least. I hardly ever dream, let along remember it with any clarity. The more interrupted my sleep, I think, the more likely I am to recall. And it was a great night not to sleep, really - I start a new job in, uh, 38 minutes. So I suppose I ought to go! Maybe I'll write about that when I get home. Who knows? :P Also, thank God (not sacreligiously, but with every fibre of my being) that there is a drive-thru Starbucks on my way!

Well, I've been having quite the adventures lately, especially in the Customer Service department. It's been a terribly boring month - get up, run errands, maybe go for a walk, but all in all I feel as though I'm doing nothing at all, except to spend money (stupid car needing an oil change :P and a/c service, and about a gazillion other things that are thankfully optional for now.) Anyhow, ranting about the car is not actually my point here, so on to the Real Thing!
Instead of re-writing the whole thing, I'm just going to re-post this very frustrated email I sent to my friend Kris the other day...
Things to know before commencing:
- A while back, my laptop went kaput.
- I found out it was the motherboard, but I was one month past warranty. I could buy a few more months of warranty for $300 and some odd, or replace the motherboard. I wasn't sure what to do, so I wanted to think on it for a while.
- When I called back, I found out the warranty was no longer an option. They hadn't told me it was a time-sensitive offer.
- I called again to find out exactly how much it would cost to replace the motherboard. They gave me estimates for three different motherboards, all around $600. Oddly enough, I couldn't pull $600 out of my ear, so I had to think on that for a while. Upon deciding that I just might be able to pull it out of my budget as long as I was careful, I called Dell again. I should have known...

excuse me but could you please shoot me in the head and put me out of
my misery? just got off the phone with Dell (in India) and they now
say that they can't replace the motherboard, that they don't make
notebook motherboards anymore...what on earth?! a month ago they had THREE
(>$600) quotes for me and now they have NOTHING!? Seriously I am
so mad I could spit nails! Plus the guy couldn't speak English
properly, and I don't mean just the accent. The accent I could deal
with - I'm talking about complete misuse of verbs and reflexive
structures and not being able to communicate effectively! I don't
care where they're from dangit but I want them to be able to DO THEIR
JOB.
*sigh* So I'm out a very expensive laptop I'm not even done paying
for?! And I'm cranky and upset that I was "that woman" on the phone
for commenting on his English syntax (quote: "your sentence structure
leaves much to be desired" which earned me a very bitter comment from
the CSR.) But the worst part? Jerks made me cry!!
(wanna beat them up for me? :P)
/rant
ok thanks for listening ;-) ttyl

And since then? I told the Customer Service Representative I wanted to speak with his manager, he told me he was busy and would have him call me...oddly enough, my phone hasn't rung. Hmm. Guess I get to call them back again today. *shudder*
Okay, now that I've expressed my severe angst with the twits that call themselves Dell Customer Service, it's time to carry on with my day. My Auntie Sharon called me to invite me to Hairspray, and we're going to catch lunch first. So there's something on a slightly more positive note ;-)

I spent much of the last few days baking a cake, and I finally got to try a slice tonight - and I must say, it was completely delicious. :-) 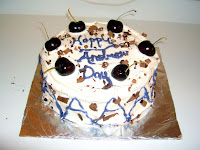 Driving home after the delivery and a quick grocery shopping trip tonight, I was feeling a little melancholy, and then I noticed the sunset driving over the bridge. But I had a couple problems...I obviously couldn't stop right on the bridge, and the smokestack from the pulp mill was in the way. So I took off to chase the sunset. Down the road to the pulp mill - smelled lovely, by the way - until I could get an unobstructed view. The artistry of sunsets never ceases to amaze me. Here's some of what I came up with. 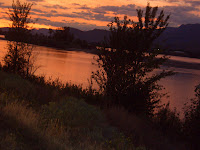 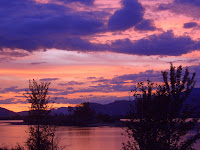 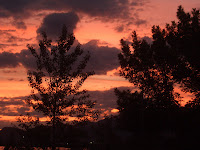 Face of Earth = Dropped Off!

Okay, well, hello world. I've basically disappeared due to a tremulous internet connection and even worse cel phone service. If you know me IRL, just show up sometime - I'm sure I could use the company. For now, I'm getting down to the last vestiges of unpacking (I'm planning on posting pics of the new place soon) and just reading an awful lot of books and watching movies that I've had from the video store for *way* too long. I just finished "Catch and Release", because I'd only seen it halfway through when the others with whom I was watching it decided it sucked beyond belief, and turned it off. It didn't get much better, though it did improve slightly, mostly due to Kevin Smith.
In other news, there isn't really any other news. Sorry I'm so boring. But if you're thinking of me, an email would be much appreciated - even if I can't stay connected long enough to chat, something like that would totally brighten my day. (And a bit of brightening goes a long way in a basement suite with only one window :P)