Robyn just blogged about Epiphanie and darn it I want one too! They're running a pretty sweet contest!
I'd heard about the contest via the Beyond Snapshots blog (but didn't have any brilliant red photos to compete) and their bags are just so lovely! Robyn said she'd have a hard time choosing between the camera prize and the travel card, but not me, man. I know I'm still growing into the camera I have, so, please, I want to GO somewhere!!! 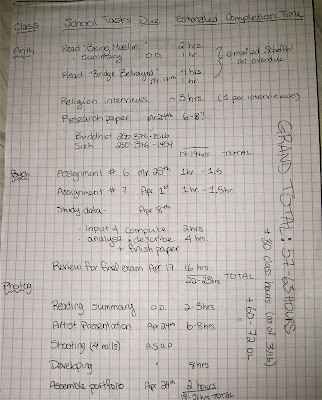 Nope, not me. The numbers:

Distance classes: Political Science, about 32 hours, and English, about 40.

So that means, if I ditch the distance classes, and I work on this Monday-Friday (on top of my regular class hours) I will need to do just over 4 hours of work per day. If I keep the distance classes, then that number more than doubles, to 9. Then again, I could also keep only ONE of the distance classes (I'll be discussing what to do about that with my adviser tomorrow) and have either 2 or 3 more hours, depending which I chose.
If I gave up my Saturdays, I could do a little less work each day. But I think if I do all this, that having a day completely off (since on Sunday I have church and my cell group) would be really healthy.
It may seem silly to some to have taken so much time to figure this all out, but I am less stressed about it having broken it down and seeing, or at least estimating, exactly how much time it will all take. Even though it's still obviously a whole lot of work, knowing what that work is, is easier. It's just like eating an elephant, right? One bite at a time. 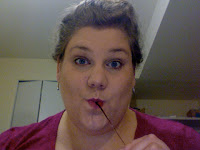 I've been terrified this entire year of saying that I will graduate in May, because the biggest part of me honestly doesn't believe I can do it. As it stands right now, to graduate, I need to:

- finish the two summer correspondence classes that I've barely started by April 7th (probably at least 60 hours of work)
- two book summaries (only 2pgs each) and a research paper on a local minority religion (don't even know whom to ask)
- full photography portfolio (at least 5 more rolls of film, I think, including developing the negatives, making a contact sheet, and developing selected prints - hugely time consuming), 2pg reading summary, and photographer presentation for a class which the prof said that I "need to strongly consider withdrawing". And she's right, because I've missed a ridiculous amount of class, and it's a studio class, so attendance is very important. She says I should get a medical withdrawal because of my depression ... but to get a medical withdrawal, you must withdraw from the entire semester, and then I would lose the entire YEAR of stats, which is the only class in which I'm not ABSURDLY behind. So I really, really WANT to make it work, if at all possible.
- analyze and report on the data from our study in stats class and finish the major research paper on that
- finish two statistics assignments (due next Thursday and the Thursday after), a quiz today, and a comprehensive final exam April 17th

And I think that's everything, almost all of it in the next three weeks. I think if I had the work ethic of some of my friends, I might be able to pull it off. I'm so scared, and so daunted, and worst of all, terrified of just how much I'll hate myself if I fail. I want to cry, and hide, and give up, almost as much as I don't. So I guess it's just a question of letting the determined part of me win out over the coward, to beat down the worst of the depression, at least for a few weeks.

Because The Bloggess Said So

With all the web-type blog awards that go around, some of us non-famous folk tend to feel a little left out. Never fear - The Bloggess to the rescue! She let us pick our very own award from a selection of proud titles, and while I was tempted to go with this one:

Or maybe even this one:

I have decided that the one that best applies, and really, the one of which I am most proud is this:

Because really, people - IT'S NOT THAT HARD!

It would probably get a z-score inside the region of rejection!

I am reading silly cartoons. And anything that can makes stats amusing to me gets major kudos!